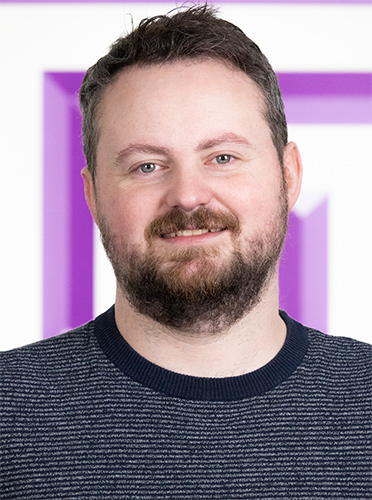 Issue 4 of our Team Spotlights. Today you can get to know Stuart, our producer.

In 2009 I'd completed my degree in Media Production and was really eager to hit the ground running and get a job working in video production as soon as possible. I managed to get some really good hands-on experience working for a few different companies in the following years, but the long term prospects of the companies weren't fantastic. In 2011 my eldest Zach was born so I needed to think about stability, I took an in-house role as a video producer with a large company in the leisure industry, I learnt a lot there but my commute on a bad day could be nearly two hours! Also, I wanted to work as part of a video production team rather than a sole videographer. Deciding to move on, I looked at a few local video production companies and luckily Cypher was advertising for a video producer. I sent over my CV along with a link to my showreel of work that I'd put together since leaving university. I came in for an interview and met with Adrian, Brian and Chris. I really liked the company and it felt like the next step for me career-wise. A few hours later I got a call from Brian offering me the job and after 6 years I've never looked back and now have a fantastically short commute, unless we're on route to a conference that is!

Cypher is a fantastic company to work for, early on in my career I worked at places that did things, shall we say, somewhat questionably. When you're starting out it's hard to fight against that and you start to wonder if this is just the way business is done. But Cypher's attitude is very professional and pragmatic, yet at the same time consistent while being open to change and new ideas. That was the type of environment I'd been striving to work in since day one. Also, the equipment is extremely current and our methods and workflow are industry standard, which means we're all on the same page.

Working for Cypher means that no project is ever really the same, even if it appears to be on the surface, every edit, shoot or conference has unique challenges. I remember back in 2016 working on four separate projects over the course of three weeks, I started off in London on a two-day shoot filming some internal training video for one of our clients. This involved working with actors in an improvised setting and things were changing and evolving all the time and time was always against us. We had to consider camera angles, sound, lighting and also consistency between takes, which with improvisation can sometimes be tricky, but everyone rose to the challenge. There were a few days to edit the rough cuts together before I was off again on a two-person shoot to Spain to film a short series of video blogs at a conference in Barcelona, then straight on to Amsterdam for two days to film a series of promo interviews for an upcoming conference. Once back in the UK there were a few days to catch up with things back in the office (and even a quick trip to Peppa Pig World for my son's third birthday!) and it was off again on our fourth job of the month to the Marriott in Millan for a week for an International Tax symposium to edit and operate live cameras.

Logistically this posed a challenge not only in time management but with clients needing cuts of projects, revisions and final versions it can be difficult to not only keep track of things when you're on the move but to actually find time to do them. But the way we work at Cypher means we're set up and suited towards remote working so as long as we have the footage and a fairly reliable internet connection we can get the editing done and over to clients, even when we're out of the office. It was a great challenge both logistically and creatively to effectively work on four big projects at once in such a short space of time, but with Cypher's ethos and best practices in place, we were able to rise to the challenge and produce some great work for our clients.

Working from home has been a challenge, The whole family is here so there's two of us working remotely and two boys under nine to try and keep on track with school work too. As I mentioned above I'm no stranger to working out of the office, so I've been able to adapt to working in a new environment fairly quickly but getting our schedules to coordinate has been the real trick. Being flexible and having the support from Cypher to do so has helped with that as it means I can tag my partner out when she's got something to deal with and vice versa. Adding in the homeschooling aspect has meant that there's a lot to cram into a day, but as it stands, on week three we're finding a good balance and making sure we're all getting the time we need. If nothing else it's been a good refresher for my spelling and times tables!

Some of my favourite things

When I'm not at Cypher I like to spend time with my family and try to think of interesting and unique activities to do and new places to visit. I've always been a firm believer that you should pursue what you love as a career, for that reason one of my favourite things to do is actually make videos in my spare time. I've made them for various platforms over the years and I've always had a love of comedy so I try to incorporate some offbeat humour where I can. I also started writing short stories during my college years and I find that it can be a great way to relax, unwind and can be quite cathartic, even with no ultimate goal in mind. I've also been a big lover of film and cinema over the and have always tried to watch as much as possible good or bad, although I do have a weakness for any type of metaphysical, mind-bending sci-fi, usually the sort of thing that will annoy my partner for days as I discuss the plot details at length.