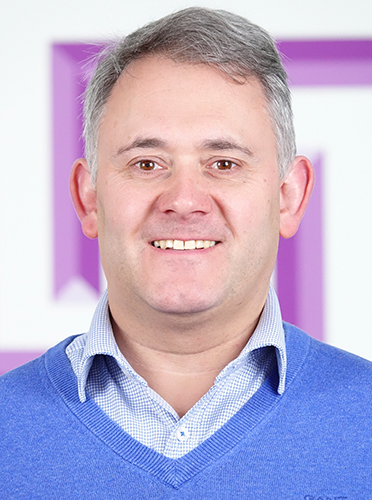 The final installation of our team spotlights! Next up is Adrian, our Managing Director.

Since 2 weeks before the company started trading on 1st November 2003. It took 2 mad weeks to set the company up, then we were off and running.

Following the liquidation of the previous company that I worked for, and after a little job hunting, myself and Brian decided to start Cypher Media. It’s never quite as simple as it sounds. We were still in the offices of the company that was in liquidation, working under direction of the banks to finish any outstanding work and get the final invoices out. We had a call from a client telling us that we had won an event that we had quoted for. We had to tell them that we could not help them as the company had ceased trading. Basically, they would not take no for an answer, they wanted our team to deliver their conference. We looked at the numbers and knew that this job would pay mine, Brian’s and one of our staff’s wages and a few overheads for 2 or 3 months. As we had no other prospect of work at that time, we decided to go for it. Whilst Brian concentrated on the client’s project, I set the company up. Within 2 weeks we had everything we needed, bank account, VAT number, an office and some secondhand furniture and equipment. The rest, as they say, is history.

What do you like about working at Cypher Media?

We have a great team. We work really well together and we all work across all areas of the business, everyone has something to contribute. We are all involved in the design elements of a project and we will all watch a video as it is being produced. The feeling of ‘togetherness’ is enhanced through our on-site working at conferences and events, I know it sounds cheesy, but we are like a little family, after all there are several week a year when some of us live together.

Last year, during a site visit to a hotel we were struggling to find a main room large enough to host the conference. The hotel then took us to the underground car park, telling us that we could use this space. Initially we were shocked, but we love a challenge. With this type of space the first thing to be done is to add in the usual things that you would get in a conference space such as electricity supply, firefighting equipment and internet access as well as making the space safe by making the floor even, covering drains and shielding the space from the outside. Once all that is done we got on with sub-dividing the space into a plenary room, breakout spaces and coffee areas and ensuring the access was safe for the attendees. With all that done we could start on the usual rig, building the set, stage and raked plenary seating area and rigging sound, projection, plasma screens and adding the branding. The end result was fantastic.

Working from home has been a juggling act, trying to keep in touch with clients and prospects whilst missing the constant face-to-face interaction with the team, although we do see each other daily with our Google Hangout team meetings. Along side this I have 2 sons that have still been "at school" so I have needed to make sure that they are signed-in to lessons and still getting their work done. My wife is also working from home, it seems like each corner of the house has turned into a small office. Then there is a family to feed, I don’t think I have ever cooked so much, or washed up so much. Most evenings, as a family we are playing a board game, this is really fun and something we don’t usually get time to do in the week – good times to remember.

Some of your other favourite things?

Most fun car I have owned - Lexus IS200 Sport