It has been an extremely busy few weeks for the team here at Cypher HQ. Kicking it all off was a huge, 4-day event for a global audience across all regions. Take a look at what this event entailed, and how we made it work!

After weeks of preparation, we finally made the client's vision a reality. Our team was given the task to seamlessly run over 130 live streams in a 4-day period spanning every time zone across the globe. We achieved huge success technically, along with a great viewer turnout. Over 14,000 total views across 130 live streams with an average of 108 viewers per live stream!  The Cypher Media team worked around the clock (literally), taking shifts for over 96 hours of continuous production.

There were many elements to this event which we have detailed below.

The workshops entailed two teams of 6, each working 12 hour days. Our team worked hard starting and maintaining the workshops, of which there were almost 120, each spanning an hour long. Our technical crew were on hand to advise presenters of optimal camera and sound for the streams, as well as assist throughout the entire presentation if required. Our goal was to offer a similar level of technical support as we would do onsite at a face-to-face event. Each workshop featured a pre-recorded video that we had filmed and edited in the weeks running up to the event, followed by a presentation and Q&A from the presenters. To push out so many live streams in such a short period, we preloaded 6 laptops with stream keys and templates in Open Broadcast Software (OBS). With the built-in scene collection, it allowed us to customise both what the viewer saw and heard whilst the live stream was running. 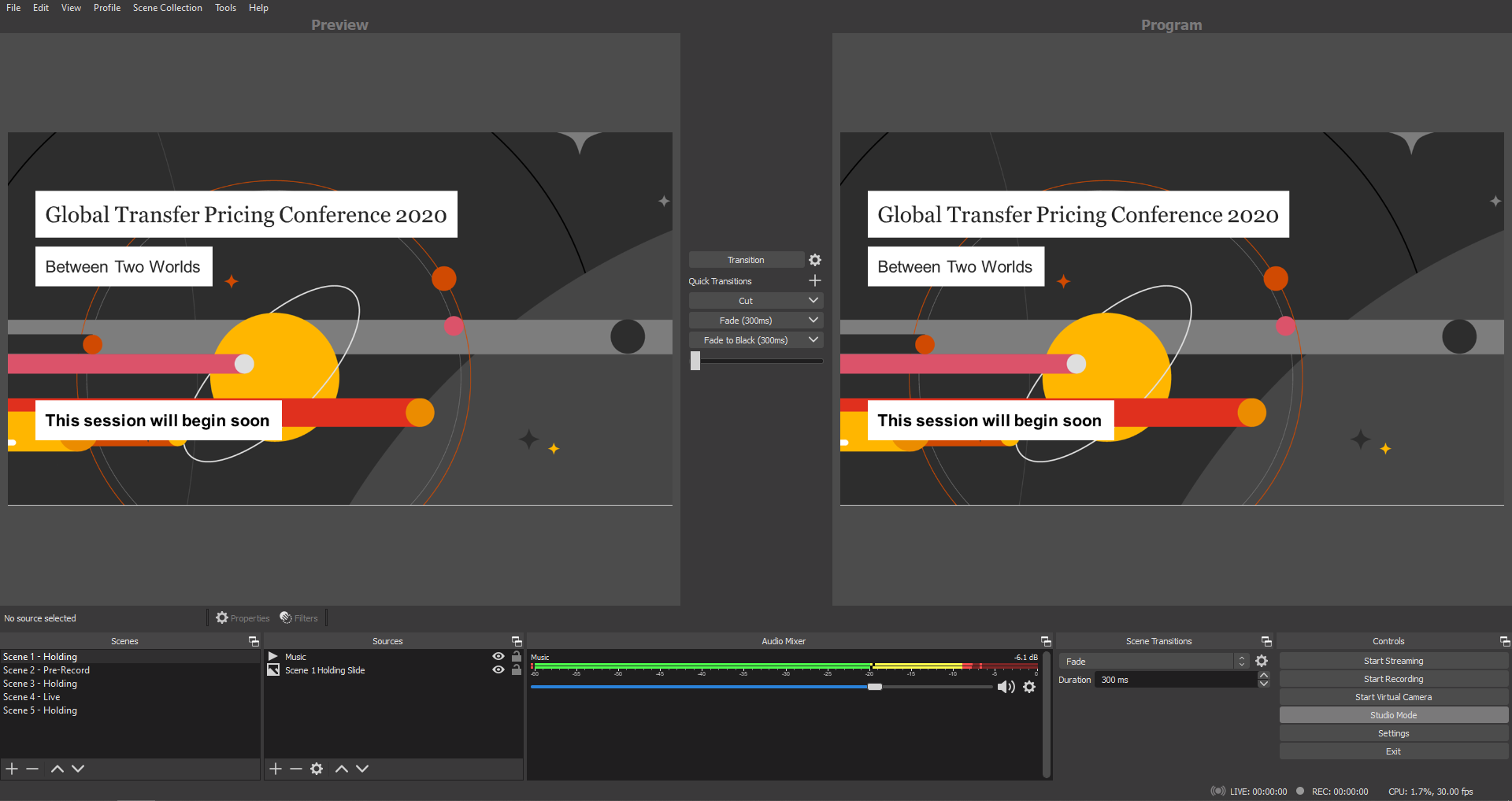 Our plenary live streams were conducted 3 times a day, in order to cater to the Americas, Europe and Asia. Our team worked to ensure the best viewing experience for the delegates that had tuned in to see the session. Some of the plenaries used live polling to encourage engagement during the sessions. Our plenary Wirecast setup allowed for up to 8 speakers on screen at any given time. Slides could also be taken directly from a screen share and broadcasted live with a picture-in-picture view. The Wirecast Gear 310, was the workhorse behind this process. Livestream links were pre-loaded and redirected to be embedded inside the official app for this Global Transfer Pricing Conference.

On top of the streaming, we also built a registration website hosting interactive Territory, Industry and Technology lounges. These virtual lounges were populated with unique pre-recorded videos. We had filmed, edited, and uploaded over 80 videos across an intense two-week period. The website allowed clients & delegates to showcase what they’d been working on, by uploading files to the “resources” tab, unique pre-records were watched by simply following the “play video” link, and we also added in a chat feature, which allowed clients to converse with each other regarding their chosen subject. This allowed excellent networking and learning opportunities,to best replicate traditional tace-to-face interaction. Each of lounges also had bespoke, branded graphics as per their topic. At the end of the week, over 1,770 resources were downloaded, along with over 200 topics created under the chat feature. 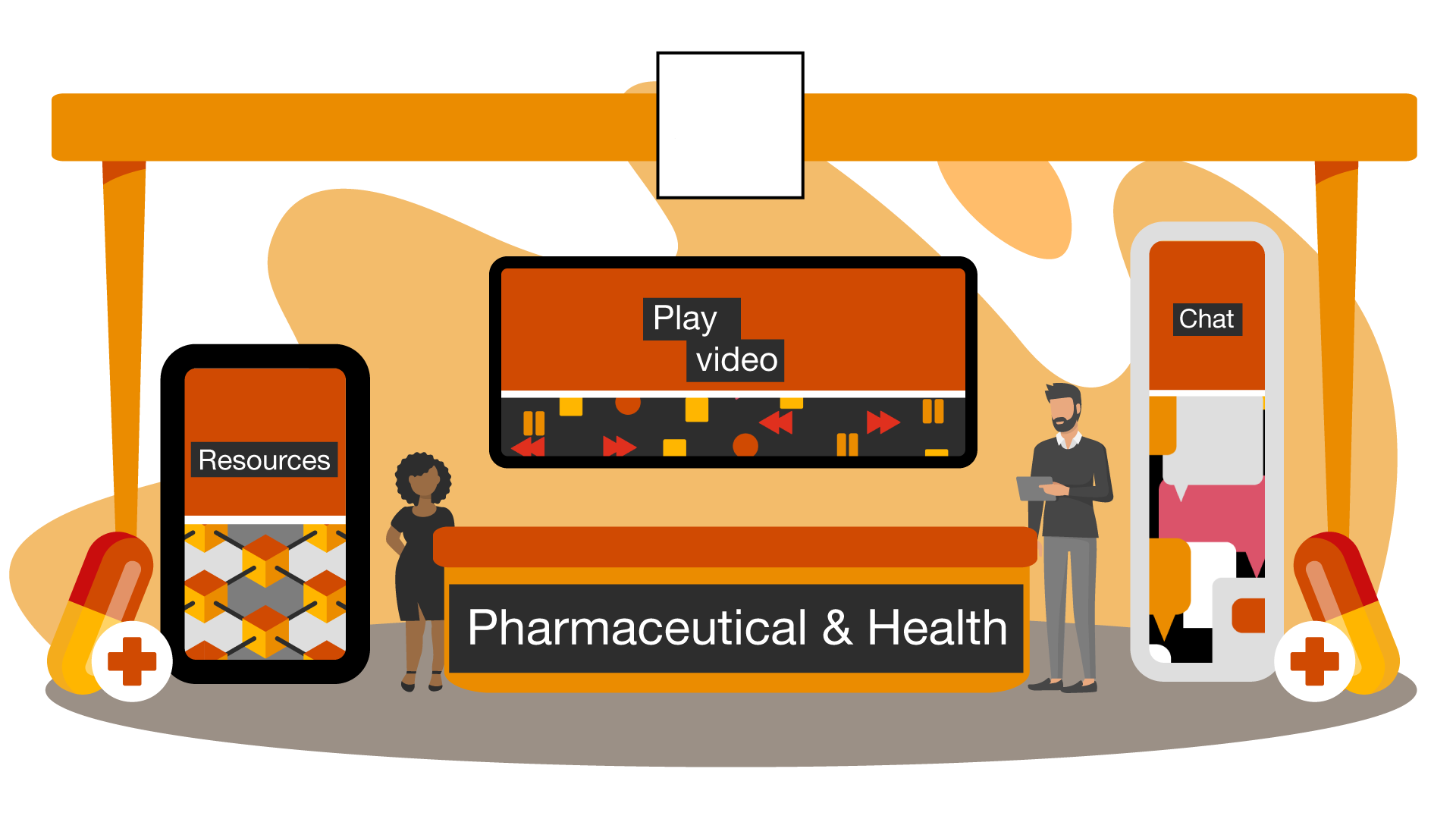 With the shock to our industry, we have had to adapt the way we do things. Live stream events have become the new normal in the stepping stone to getting the events & entertainment industry back to what it once was. We're eager to get back on-site but in the meantime, using live stream technology is challenging, exciting and engaging for both ourselves and our clients.

If you have any questions or queries about a virtual event you're planning, don't hesitate to head to our contact page for assistance.